The Hardware Wallet Ledger Nano S is a convenient and secure way to store the Bitcoin, Ether and ERC20 tokens. It supports the forks of Bitcoin such as Bitcoin Cash and Bitcoin Gold, as well as Litecoin, Dash, Zcoin, Ripple, QTUM, NEO, Stellar Lumen and many other crypto currencies.

Advantages of Ledger Nano S - What are the useful functions of the wallet?
Most think that the ledger is just a replacement for the popular online wallet (Electrum, Exodus or MyEtherWallet). It would be wrong to evaluate such a device only by its ability to store the crypto currencies.

The ledger enables two-factor authentication FIDO U2F, which protects your accounts at the exchanges and important websites.

It allows the user to trade directly on the Etherdelta Exchange without the need for foreign elements (users pay immediately with the ledger, without intermediaries). Many investors order the ledger only because of this feature.

The Hardware Wallet supports integration with the Ethereum Wallet (MyEtherWallet).

You do not need to enter a password or open a wallet with a private key (JSON file). In addition to MEW, the wallet is connected to Copay, Electrum, GreenBits, BitGo and Micellium. 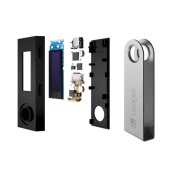 Safety is a relative term. The world of finance cannot promise a 100% guarantee. The most important security features of the Hardware Wallet that users can compare with those they currently use are listed below.

1. wallet security is realized by a special chip (ST31 / STM32, certification level: CC EAL5 +) with encryption support.
2. All operations are performed in the wallet memory without outputting the data to the Internet or the computer. Sensitive data can be published by a virus, phishing or malware.
3. The working process with the Wallet:
Users connect the Nano ledger to the computer and the device starts working. To open it, enter your personal PIN code. The setting of 7-8 characters is recommended. If the PIN is entered incorrectly after three attempts, the ledger returns to the factory settings so that an attacker cannot gain access to the wallet and the crypto currency.
4. To work with the wallets, confirm by re-entering the PIN code and pressing two physical buttons on the body of the device.
5. The operations cannot be performed without such manipulations - they protected the crypto currency from malicious software or remote intervention.
6. The private keys are stored encrypted in the device and do not appear anywhere. Nobody can copy them without the knowledge of the owner.

The purse itself is protected.

The owner needs to know the secret seed rate necessary to restore the purse. Users receive the seed record the first time they start the ledger nano-S.

Crypto Currencies in the Ledger
Which currencies are supported by Ledger Nano? This is the most common question.

Many are interested in how many crypto currencies (and which ones) users can store in the hardware wallet.

Many will be pleasantly surprised that the ledger already supports more than 20 different crypto currencies and their forks (Bitcoin Gold, Bitcoin Cash, Ethereum Classic) and all ERC20 tokens (if they are connected to the Ethereum Wallet, MyEtherWallet).

Most of the currencies with the highest capitalization are already included in the Wallet or will be integrated in the near future.

Many like that the ledger Nano as a bitcoin wallet actively supports intelligent forks: Bitcoin Gold was recently added to the Walltet without dangerous manipulation by users.

When working with the Bitcoin Wallet and Litecoin Wallet, there is a practical choice between the Segwit and Legacy Forks.